A long time ago I was browsing for recipes and found a recipe for a cake which grabbed my interest, mainly because the technique is something I have never done before and because it really looks delicioso!  Yes, with all the milk injected into this cake who would not taste so.  Everytime I wanted to bake and look at my todo recipes, I always consider making this...but during baking time I would change my mind because of all the calories it contains and of the waiting time before you can actually eat the cake.  But when I saw that the Bake Along bloghop is actually making this cake, I decided it is the time to really DO it.  I have always wanted to join the bloghop and this is a good opportunity.  I am hitting two birds in one stone.  I am doing two things which I so long wanted to do, an exciting recipe and blog hopping.  Yey! a milestone for me.

I found several recipes for Tres Leches cake but I decided to make cupcakes instead of cakes so that I can giveaway some (I do not want to eat all that calories..hehe).  I was afraid to turn a cake recipe into a cupcake because of the possibility that it might not hold firmly.  Then, I found this recipe from Bakers Royale for a Tres Leches cupcake with Dulce de Leche buttercream frosting.  I followed the recipe for the cupcakes but I did not use the frosting.  I decided to do a simple frosting of whipping cream with vanilla extract, drizzled with Dulce de Leche.  As I was assembling the cupcakes, I find it is too plain with just the Dulce de Leche so I sprinkled with some chocolate powder.  I actually used Milo because that is the only one I have. :)

Well, here is the outcome. 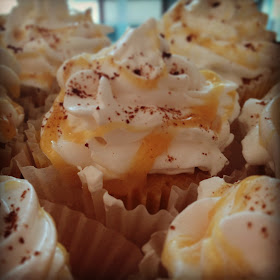 Ooops! I did not notice the smudge in the liner.  I was too much in a hurry to take the photo because my little darling angel turned off his halo again and is trying to simply make his way and take some of these yummies.  See the evidence... 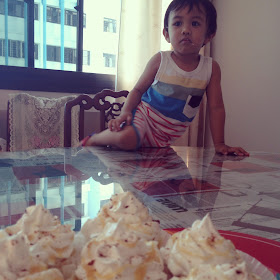 Here is the recipe, my modifications in Blue:


I am submitting this post to Bake Along #43 - Theme : Tres Leches Cake hosted by Joyce of My Kitchen Flavours , Lena of Frozen Wings and Zoe of Bake for Happy Kids.

And Tea Time Treats hosted by What Kate Baked and Lavender and Lovage.
Unknown at 08:51
Share